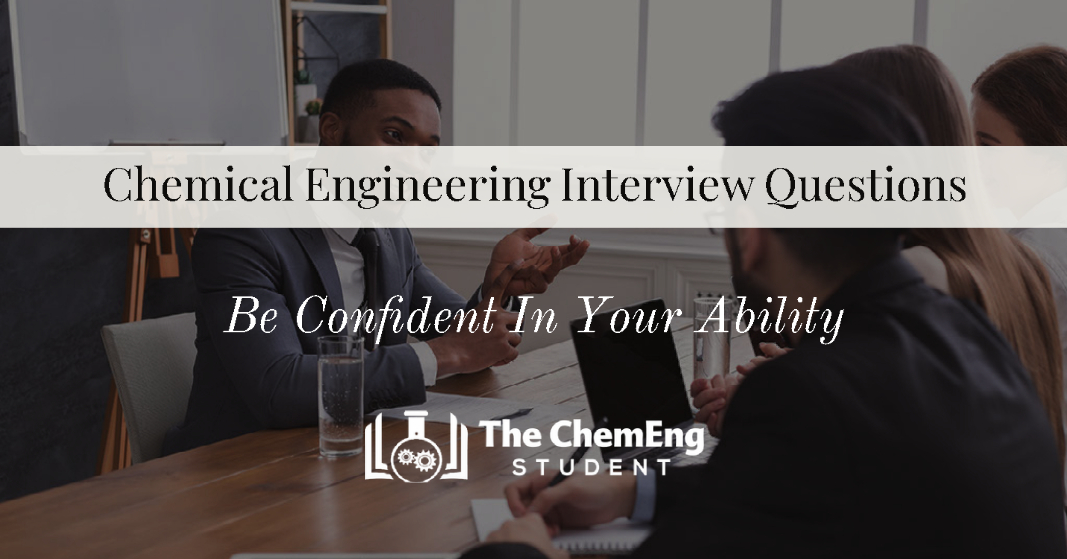 Chemical Engineers have skills and knowledge in many fields including chemistry, biological sciences, physics, and maths. The role of the chemical engineer is common in a range of sectors which include oil and gas, energy, food, and drink manufacture, pharmaceuticals, nutraceuticals, plastics, consumable goods, and much more.

Traditionally Chemical Engineers are perceived as oil & gas only. This couldn’t be further from the truth. A survey found that almost 75% of the general public didn’t know that Chemical Engineers could work in industries other than energy! As a professor once said, “almost everything in this world has gone through the hands of a Chemical Engineer at some stage“. So as you can see the job market is at your fingertips.

The dreaded interview, one of the most nerve-racking experiences of anyone’s career. Typically a Chemical Engineers’ interview consists of two parts and is conducted by a pannel of two or more people.

Firstly, the competency based questions. These are exactly the same as any other interview; designed to understand your work ethic, your background, and your life experiences and also to ensure you are a good honest person.

Secondly, now the formalities are out of the way, this is where the interview differs from other industries. The questions shift towards your technical abilities and that you understand either basic or advanced technical terms or equipment operations.

For recent graduates, this can seem like a Herculean task having to sound convincing that you know exactly what you are talking about. Graduates get “special” treatment as your interviewers will appreciate you arent experienced and will tailor their questions accordingly. Regardless of your experience level, the format will be the same, if you go for positions of more responsibility, you may be asked additional questions of people management, leadership, etc.

Tips on How to Succeed in the Interview

As the old saying goes ” Fail to prepare, prepare to fail“.

Interview preparation is vital so prepare by analyzing the Job Description, Job Advert, and look up your interviewers online such as LinkedIn, and find their speciality, their experiences and other attributes.

Your next step should be to consider the types of behavioral questions you could be asked for each aspect of the role. In competency-based interviews, past performance is the greatest tool for predicting future results so questions will be focussed along the lines of “Tell us about a time you have…..”. Use these questions to your advantage, tailor your answers to suit the job description and show them that you are the best candidate for the job. Each aspect of chemical engineering you have identified, it is worth preparing examples of when you have delivered relevant behaviours.

The best method for answering competency questions would be using the STAR model. With the STAR model, you would state first the Situation to provide context, describe the Task, which needed to be undertaken in order to progress, outline the Actions you took and finish off by tangibly describing the Results.

Entropy is a measure of disorder within a system. It describes the behaviour of substances within an equilibrium environment. Gases inherently have greater entropies than liquids.

2. What is an isochoric process?

This is a thermodynamic process in which the system has a constant volume. Since the volume is constant the system will have no work. You can then determine the relationship between pressure and temperature within the system.

PFR have the highest conversion rates of all the reactor types. They have more control over the system’s reaction and operating conditions such as temperature and have similar working principles as FBCR’s. Despite this, however, they are costly and have high operating and maintenance costs.

4. What is global warming?

Generically global warming the process by which the global temperature increases due to an increase in the volume of heat-insulating gases are released into the atmosphere, creating the greenhouse effect.

5. What is carbon sequestration?

6. How does a Spray Condenser work?

The Spray Condenser. The coolant is sprayed, using nozzles, into a vessel to which the vapour is supplied. It is important that the spray nozzles and vessel are designed to produce a fine spray of liquid (to give a large interfacial area for heat transfer), and a long enough residence time of liquid droplets in the vessel.

Your answer should include these keywords: Fluid, Resistance, Stress

9. How does a catalytic converter work?

In the case of paints, the pigment is the tiny particle that is suspended in the solvent-binding medium solution.  When paint dries, the solvent portion of the mixture evaporates away, leaving the pigment suspended in the binding medium in a hard layer.  These evaporating solvents are also largely responsible for the “smell” of the paint you are using.

12. How should you extract hydrogen from water?

Electrolysis is the process of using electricity to split water into hydrogen and oxygen. This reaction takes place in a unit called an electrolyzer.

13. Describe food additives and how they are used?

Food additives are substances added to foods to perform a range of specific function. Additives may be natural, nature-identical or artificial.

14. Based on two pressure measurements how can you estimate gas flow?

To find the velocity of the fluid flow, you must first determine the pressure at the two reference points. Then multiply the differential pressure by two and divide this number by the density of the gas.

15. What are the implications of the minimum flow required by a pump?

Every pump has a minimum flow requirement. Operating pumps at below minimum flow can result in the following consequences:

Adding a bypass line will allow the pump to sustain the minimum flow requirement, even when the process requires less flow.

16. What problems are associated with large temperature differences in boilers?

When a boiler overheats there are several issues that may arise, most noticeably leaking. The conduction of heat through the material causes expansion and as a result changes in the solid structure can occur causing major structural issues.

18. Describe the characteristics of a good quality water cooling tower.

A good quality cooling tower operates on a pH level around neutral since the carrier fluid is water. Any impurities such as sulphur and chlorine will hinder the performance of heat transfer. They should be situated in locations that have low air humidity and high temperatures to allow the moisture to evaporate effectively. This process is characterised by the wet-bulb temperature of materials.

19. What characteristics of bulk solids can affect their ability to flow properly?

When handling bulk solids, there are several factors that can affect your material flow. Most of these are environmental; all of them need to be taken into consideration. Moisture content, temperature, particle size, and time of storage at rest can have a tremendous impact on your material’s flow properties. How your material flows is a function of its cohesive and friction properties. As such, conditions that affect the cohesive strength and friction properties will have an impact on its handling capabilities.

20. What compounds are responsible for the foul smells from wastewater plants?

Hi, my name is Callum Russell I am a PhD student in chemical engineering with a 1st class honours and Masters degree. My current research is on the cultivation of microalgae for the production of biodiesel and high-value products, which aims to improve the economic performance of the bioengineering industry. I am the founder of The ChemEng Student and Direct Tutoring Ltd, I have over 8 years of teaching experience and would now like to reach as many Chemical Engineering students as possible from around the world and share my knowledge and experience with them.

My main areas of interest in chemical engineering are…

Why Learn With The ChemEng Student 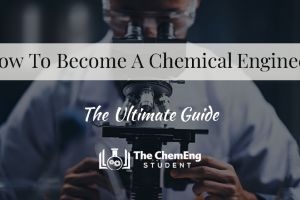 How to Become A Chemical Engineer 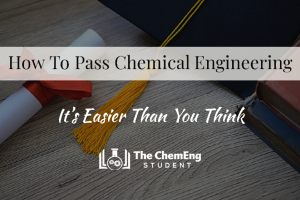 How To Pass Chemical Engineering 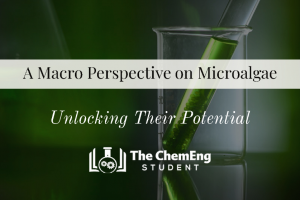 A Macro Perspective of Microalgae

READY TO LEARN WITH US?

Not a member yet? Register now

Are you a member? Login now

We use cookies on our website to give you the most relevant experience by remembering your preferences and repeat visits. By clicking “Accept”, you consent to the use of ALL the cookies.
Do not sell my personal information.
Cookie SettingsAccept
Manage consent

This website uses cookies to improve your experience while you navigate through the website. Out of these, the cookies that are categorized as necessary are stored on your browser as they are essential for the working of basic functionalities of the website. We also use third-party cookies that help us analyze and understand how you use this website. These cookies will be stored in your browser only with your consent. You also have the option to opt-out of these cookies. But opting out of some of these cookies may affect your browsing experience.
Necessary Always Enabled
Necessary cookies are absolutely essential for the website to function properly. These cookies ensure basic functionalities and security features of the website, anonymously.
Functional
Functional cookies help to perform certain functionalities like sharing the content of the website on social media platforms, collect feedbacks, and other third-party features.
Performance
Performance cookies are used to understand and analyze the key performance indexes of the website which helps in delivering a better user experience for the visitors.
Analytics
Analytical cookies are used to understand how visitors interact with the website. These cookies help provide information on metrics the number of visitors, bounce rate, traffic source, etc.
Advertisement
Advertisement cookies are used to provide visitors with relevant ads and marketing campaigns. These cookies track visitors across websites and collect information to provide customized ads.
Others
Other uncategorized cookies are those that are being analyzed and have not been classified into a category as yet.
SAVE & ACCEPT